Good morning folks; yesterday I did write my blog but when I came to post it, W10 began playing silly buggers again. This morning I have spent half-hour changing some of the settings back to where I had them before, so now I hope it will work fine again – at least for a day or two. All in all, I have come to the conclusion that I don’t like W10.


Kile is with us again, even if he is full of a chest infection. He’s coughing n barking and fetching loads of phlegm (yeah, nice topic eh), but even for worse for the boy. No plans for today other that trying to get some writing done later; which brings me to …


Writing in general. When I started writing The Mission, my computer was upstairs in the back bedroom, well away from the general hubbub of life. It worked too because I got it written in very quick order. All the others came along after that, all penned in the same room. Then we moved here to our flat, and the writing has just about stopped. The only think I can think of is not being in a separate room while I write that is causing the hold up. Later today I will take a table through to our bedroom and see what I can get done in there.


Kile has home work to do, this time it’s about an artist that he has to look up on Google. Then he has to find example of their work and come up with five words related to it. I hope the artist is a decent one, not the scam-artist Trashy Tracy. The only Fart she comes up with is real crap, but the morons in the art world love her. Perhaps she drops her knickers for them all to get the reviews, that’s the only way I can see her getting anything. Mind you, I should be careful what I write on here in case she hears of it gets upset; tough titty then eh.


And talking of art (or not – depending on your view point), here’s one from the male nutter of BritArt … 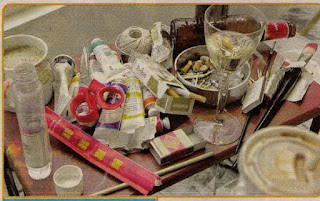 For the first time since our kitchen work started, we both went out together yesterday, not that we did anything special of course. Oh no; Jan had the idea that perhaps Kile might like a different sort of bed for when he stays here with us. So yesterday we went to Jacksons, out at Arley to look at inflatable camping beds. The type she was interested in were not available so we need to re-think it. From there we both wanted a drink, but guess what? No Cash!


So we headed off towards Coventry where we found an ATM close to the Old Shepherd pub, and that’s where we sat for an hour with our pints of diet cola. Please note that said ‘cola’ not Coke. We’ve found that most pubs these days only sell Pepsi, and not Coke. At home we have a full shelf of cans of coke in the fridge, but because I said that I prefer the pubs’ Pepsi than the cans in the fridge, so when we were in Asda later on.


I bet you found those two paragraphs a very riveting read. But the pubs’ Pepsi got me thinking and just how much freedom of choice we have when we go out. You may well feel that you get a good choice of drinks in all pubs, but unless the pub is a ‘free house’ where the licensee can provide whatever he has room for, or his customers ask for. But is that really a free choice for us? I say it’s not, simple because we all have different views about what we like and don’t like. So the licensee is still only providing what he wants to provide. Your choice is limited to what wants he wants to sell.


Look at any menu in a pub and look at it with choice item set out in various groups. The menus certainly give the impression that there is an unlimited choice of food available – if only eh! Come on now, be honest, when was the last time you saw a plain sandwich on a menu? I haven’t seen it for ages. You could always ask of course, which I have done in the past, and yet when it arrived there was a side salad with it. That’s fine, I like salad, but all I just wanted a sandwich, and not all the other bits.


You see, that’s what I mean by choice. It seems that providers only want to provide what they want to provide. Or is it perhaps that their kitchen staff don’t know enough of what to do anything outside the confines of their menu, or anything that works out of sync with it. As I said earlier this week, Jan is very finicky with her food and there is very little on their normal menu that she will eat and enjoy. That is why when I order a main course, Jan will have a dessert. Even that can course problems when I ask for them to be served together, at which point I have to explain why we want them served together.


But I still do enjoy eating out every so often, and even more so when I see a new item on the menu, or what is served to other people close by us. I am not slow in asking what something is when I see it. In the Crows nest I saw a new item, so I tried it. It was a dish of diced potatoes, pulled pork top with a fried egg. I really enjoyed it too, but sadly there was far too much for me and I left at least a third of it. In another pub I saw a young lass with a large flat dish in breadcrumbs, served with chips and side salad. I asked what it was and was told it was a flattened barbi chicken breast. Not tried that one cos we haven’t been over there since that day, although we will do at some time.


Tonight we will have a savoury rice that I know Kile and me enjoy. The biggest hold-up with it is that Kile is feeling pretty rough right now. His mum got him in to see a doctor and it seems he has a chest infection, but fit enough for school, so he should be here after school. However, that will depend on how he feels when he leaves school, but knowing him he’ll be here, he likes like peace of being away from his brother Billy. Don’t misunderstand me here. He loves Billy, but he just loves to have a time of peace and quiet away from him. 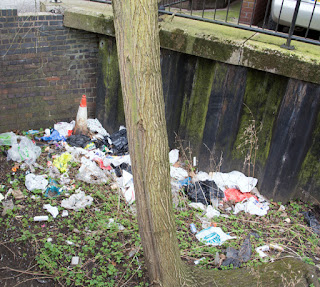 Some of the litter that is left around the River Anker close to Asda in town. In the 19th Century one writer called it, ‘… as pretty a little river you could ever wish to see.’ It’s not now, as you can see, and it’s like that all along its course through the town. Such a shame really.
Posted by BirderRon at 02:32